Created at the dawn of the smokeless gunpowder era, featuring a detachable magazine, and firing a bottleneck rimless cartridge, the 1889 is the first modern service rifle. And it's accuracy is superb, even by today's standards. The locking lugs are enclosed in the rear of the receiver, an intentional design consideration to prevent fouling of the action. It features a magazine cut-off mechanism. (In this era, rounds were loaded one at a time, and the magazine wasn't activated until the shit hit the fan).

This example has considerably less rust than most century-plus old rifles. It has been mildly sporterized. The barrel, stock, and rear sight elevation tower have been shortened.

Hailing from the black-powder era, this rifle is actually considered a non-firearm by the ATF.

Note modern 7.5 swiss ammo may work in this rifle, but it was designed for a weaker load. It is considered unsafe to shoot modern full-power 7.5 swiss loads in this rifle.

For more information than you ever wanted see this video:

(No reviews yet) Write a Review 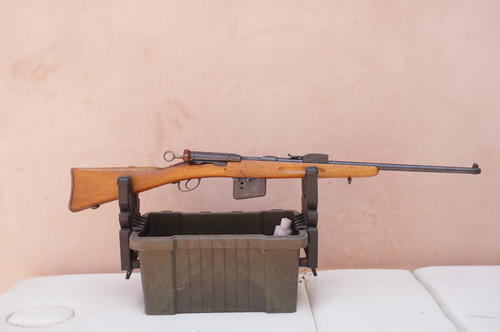